Grinding is an important operation used widely in various industries, but it is also one of the most inefficient unit operations (El-Shall and Somasundaran, 1984). Nowadays, necessity for so-called fine and micro-fine sizes keep continuously rising in industries such as mining, ceramic, paint and foodwith a developing technology. In recent years, stirred ball mills have been increasingly used for grinding particles to micro-fine sizes due to their easier operation, simpler construction, higher grinding rate and lower energy consumption compared with other fine-grinding machines (Gao and Forssberg, 1995; Kwade, 1999; Hasegawa et al., 2001; Choi et al., 2010). Furthermore, the grinding energy efficiency is an important parameter that affects the amount of energy used during grinding. One way of improving grinding energy efficiency in micro-fine sizes is the use of special chemicals as grinding aids. Grinding aids especially in dry micro-fine grinding processes remarkably increase grinding energy efficiency, bring down the limit of grinding, prevent the agglomeration of ground particles, avoid grinding media coating and improve material transport (Paramasivamand Vedaraman, 1992; Hasegawa et al., 2005). Choi et al. (2010) studied the effect of grinding aids on the grinding energy consumed in a stirred ball mill and found that grinding aids reduced the energy consumed and were very effective for micro-fine grinding. Paramasivam and Vedaraman (1992) studied the effect of the physical properties of liquid aids on dry grinding and found that aids increased the fineness of the ground particles and the powder flow. Forssberg  et al. (1995) found that the addition of 0.1 wt.% of Berolamine (a mixture of triethanolamine, diethanolamine and monoethanolamine) as a grinding aid into dolomite being ground in an agitated media mill SAM resulted in increased product fineness (b10 μm particles increase by 20%) and less energy consumption. Hasegawa et al. (2005) also showed that liquid additives used are satisfactorily effective as grinding aids due to the increase in flowability and the reagglomeration control of micro-fine particles. Clearly, grinding aids would be useful if the grinding behavior correlated with the grinding energy efficiency. The object of this study is to investigate effects of grinding aids on micro-fine grinding (d80 = 10 μm) of sodium feldspar (albite) using stirred ball mill.

2. Material andmethod
An albite sample b120 μm (d80 = 87 μm) obtained from Kaltun Company in Cine, Aydin, Turkey was used in grinding tests. Chemical analysis (by X-ray fluorescence) of the sample is given in Table 1. The specific gravity of albite sample was determined by using a pycnometer and found to be 2.63 g/cm3. Laboratory batch type stirred ball mill manufactured by Union Process type HD1 with a vertical axis mill was utilized in grinding
tests. It comprises a 620 ml cylindrical alumina (99.9%) grinding tank. The stirrer axis is fitted with four slotted plastic-coated stainless steel shaft with ZrO2 arms. The effects of various parameters were investigated in a detailed study by present authors (Gökçen et al., 2012) and optimum grinding conditions were determined to be a stirring speed of 600 rpm, a grinding media size of 3 and 5 mm mixtures (50% of each) of alumina
balls, a ball filling ratio of 0.52, an interstitial filling ratio of 0.74 and a grinding media amount of 150 g. 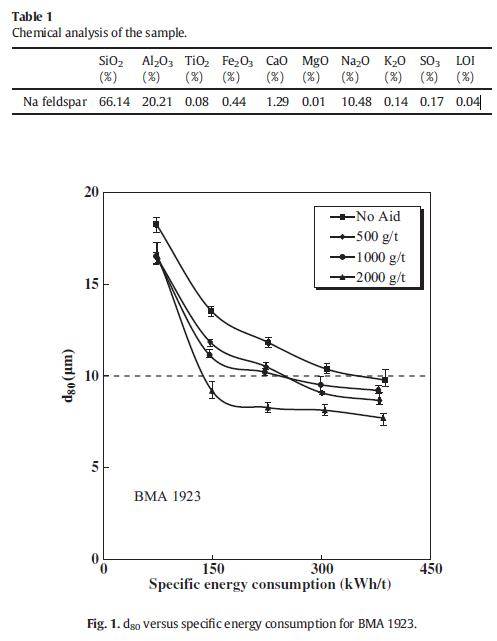 Four different amine based grinding aids, commonly used in cement industry, were used and their effect of dosage was investigated. Trade names of the aids used were BMA 1923, BMA 1517, KATPLAST 54 and GRACE XS 304. They were added in the form of liquid. The grinding tests were carried out as a batch process in which samples were taken from the pot at a determined grinding time intervals. After each test, all of the media and ground samples were removed fromthe mill and themediawere separated fromthe products by sieving. 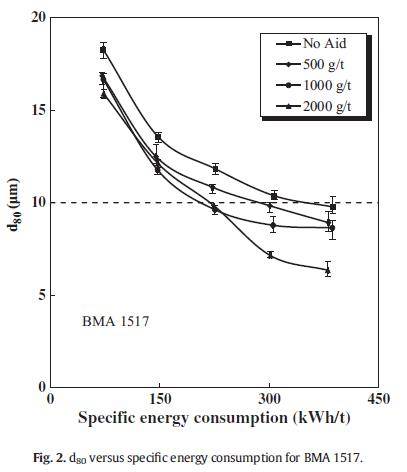 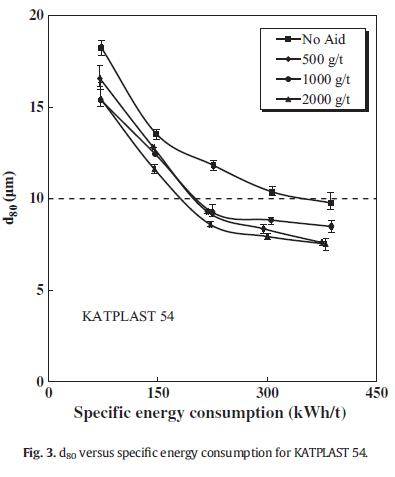 A Wet Laser Diffraction Particle Sizer Malvern 2000 Ver. 2.00 with Hydro 2000 MU attachment (Malvern Co., Ltd., UK) was used for the particle size analysis of the feed and the ground products. Its measurement
range of particle size is between 0.002 and 2000 μm. A representative amount of samples was dispersed with ultrasound in 800 ml water for the measurement. Each test was repeated three times and the values reported are a mean average. Energy consumption was determined by torque measurement (Jimenez, 1981). Torque was recorded by Mint Work Bench Program on PC. Specific energy consumption was calculated by the following
Eq. (1): 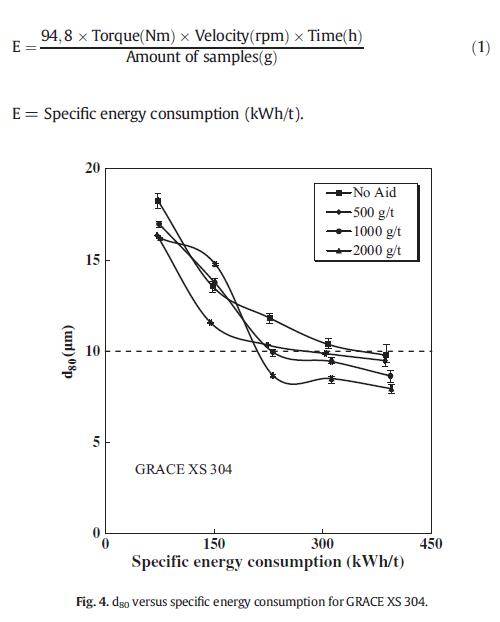 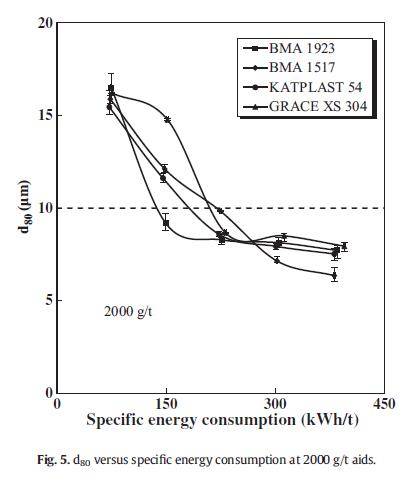 3. Results and discussion
Graphs of d80 versus energy consumption (at grinding times of 30, 60, 90, 120, 150 min) with different dosages of BMA 1923, BMA 1517, KATPLAST 54 and GRACE XS 304 are presented in Figs. 1–4, respectively.
As can be seen fromthe figures, the energy consumption increases with a decreasing particle size (d80) as expected. The d80 decreases with an increasing dosage of grinding aids at similar energy consumption values. In terms of reaching to the target d80 (10 μm, dotted lines in graphs) value, lower energy (~60%) was consumed with an increasing dosage of grinding aids (i.e. faster grinding kinetics). Grinding aid
dosage of 2000 g/t was determined to be the optimum dosage to reach target d80 in the case of BMA 1923, KATPLAST 54 and GRACE XS 304 while it was 1000 g/t for BMA 1517. The positive effect of grinding
aids on grinding performance is evident experimentally. This could be attributed to the ease of powder flow (i.e. enhancement of powder flowability) based upon the observation only. However, in literature this phenomenon is intensively discussed based upon two mechanisms (Rehbinder and Kalinkovaskaya, 1932; Locher and Seebach, 1972; Klimpel and Manfroy, 1978; Zheng et al., 1997; Bernhardt et al., 1999;
Hasegawa et al., 2001, 2005; Choi et al., 2009, 2010). One is the alteration of the surface and mechanical properties of individual particles, such as a reduction of surface energy (i.e. the reduction of agglomeration due to the reduced van der Waals attraction forces), and the other is the change in arrangement of particles and their flow in suspensions. Since amine based grinding aids used in this study, the effect of grinding aids could be explained based upon amine chemistry. As a surface-active grinding additive, amine is a hetero-polar organic compound which tends to adsorb on the solid surface by their polar
functional group, thus decreasing the surface energy, or to coat the external surfaces of the fine dispersed particles, thereby preventing their agglomeration, or to act as a lubricant on the shell of the mill and
media to prevent powder coating thus influencing their flowability. Due to such physical absorption, the surfactant-coated particles alter the particle–particle as well as particle-media grinding actions. This consequence of the decrease in the frictional forces is favorable to increasing the flowability of the dry material